Matrix PDM has been involved in the design of more than 70 large vacuum chambers, most of which contained thermal systems, for aerospace companies and government laboratories.  Matrix PDM designed its first vacuum chamber in the early 60’s in support of the NASA space program, which was just beginning at that time. 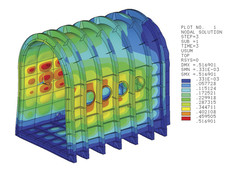 In addition to designing thermal vacuum chambers for testing satellites and spacecraft,  Matrix PDM has been involved in the design of large vacuum chambers used for fusion energy research.